How to Revoke a Power of Attorney in Texas

A durable power of attorney is an official written agreement that enables a principal to choose and assign an agent to represent their will in making particular decisions concerning health care, financial affairs, etc. On the other hand, for a third party, such as a bank representative or a realtor, this document will let for the acceptance of the agent’s signature instead of one of the principal. The durability of the form manifests in its feature of staying in effect even if the principal is no more able to express their will due to an incapacitated state. It is of great importance to choose the agent wisely and know exactly which particular powers to delegate to them.

The third person — a realtor or a bank representative who relies upon the signed and notarized power of attorney document in the acceptance of the actions made by the agent on behalf of the principal.

Why Revoke the Existing Power of Attorney?

One may want to override a power of attorney because of a decrease in the trustworthiness of the agent or because of understanding that all previously transferred transactions or financial decisions can be handled by the principal themselves. For instance, the principal could have empowered their spouse as an agent but got divorced, so now it may not be safe that commercial affairs can be affected by the ex-spouse. Since a durable Texas power of attorney lasts as long as the principal is alive (even incapacitation will not affect the validity of the form), the only way to terminate its power is through the revocation procedure.

How to Revoke the Durable Power of Attorney?

Let us take a look at the main stages of overriding the Durable (financial) POA in Texas.

Any principal who wants to revoke the existing POA document should verify with the local legislation to ensure the legal requirements are heeded completely.

There are two approaches to the elimination of the durable power of attorney:

In the mentioned situation of the desire to revoke the form because of the divorce between the principal and the agent, the former one can provide the divorce decree to eliminate the form or the particular agent’s authority in the financial affairs of the principal.

How to fill out the Revocation Form 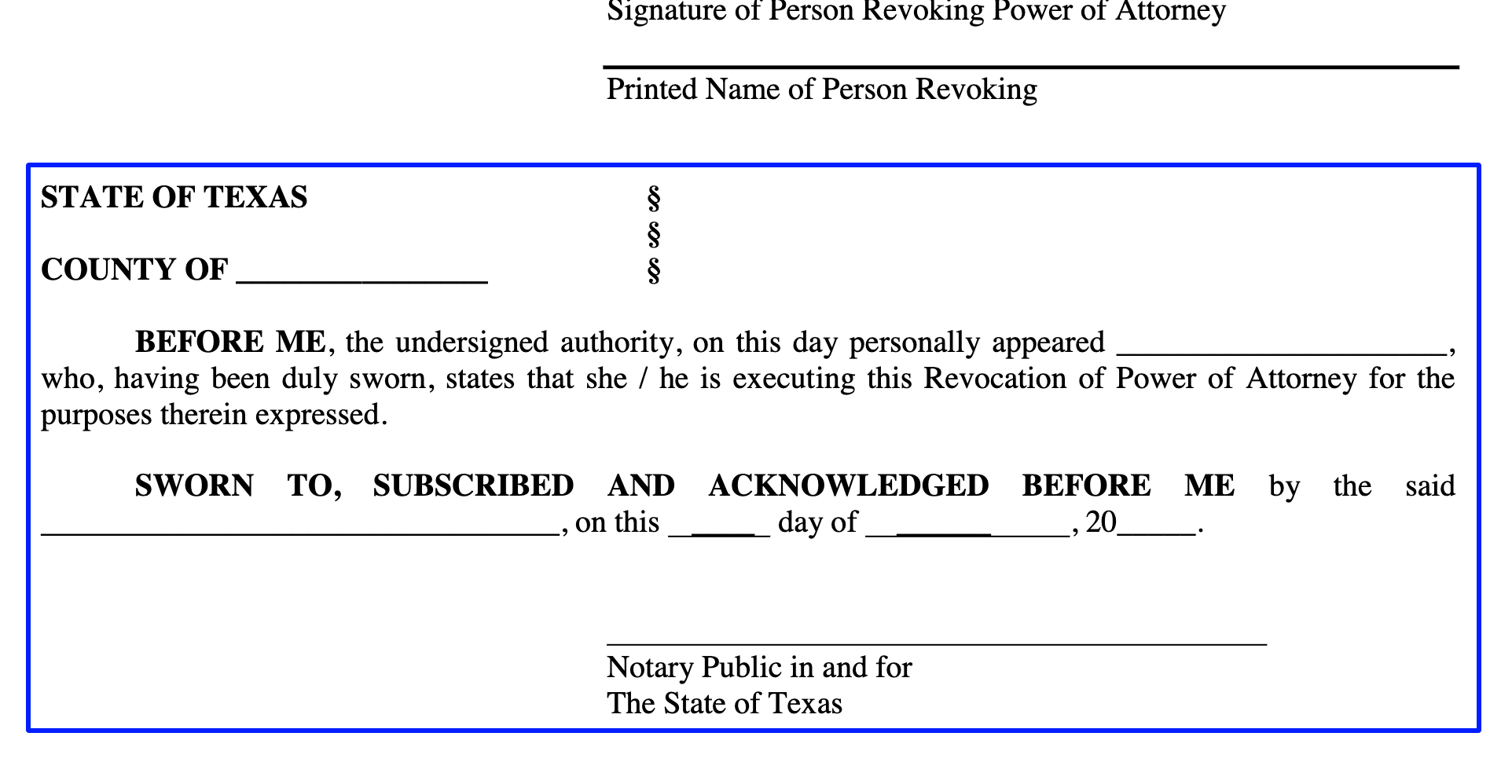 Once the form is eliminated, it is essential to notify everyone who can be involved in the financial affairs of the principal, as the agent can still act on behalf of the principal by providing the old (not eliminated) document.

For completing this stage, one can act in various ways:

However, note that each third person involved in the affairs of the principal must be aware of the changes, as well as all other agents.

The acknowledgment of Texas Notary Public finishes the revocation procedure. Also, do not forget to submit the new form to the deed service in the state of your residence—and states where the property is situated—to avoid misconceptions with documentation or fraudulent actions concerning financial decisions.

This Site Authored by Power of Attorney Texas updated: June 9, 2021